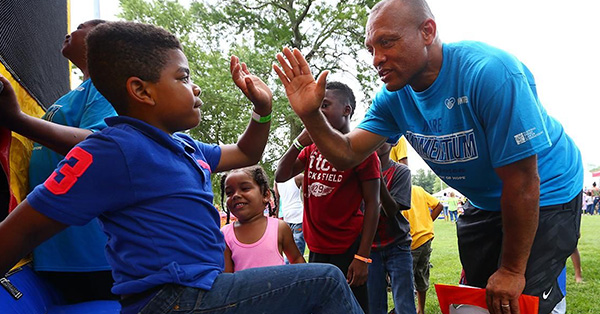 Aeneas Williams has been out of the NFL for 11 years, but you wouldn’t know it based on his popularity throughout St. Louis. He only spent four of his 14 years with the Rams, but made a significant impact during that time including his defensive contributions to the 2001 NFC Championship team.

These days, Williams is no longer prowling the secondary in search of an interception or a touchdown-saving tackle. Instead, the 2014 Pro Football Hall of Fame inductee is keeping his keen eyes peeled for opportunities to bring healing and hope to Ferguson, Missouri, his newly adopted hometown.

In 2013, Williams and his wife Tracy felt called to move The Spirit Church, a racially diverse, non-denominational church they co-founded in 2007, from the St. Louis suburb of Clayton to Ferguson. It didn’t make sense until a year later on that fateful August day when the shooting death of Michael Brown setoff a firestorm of protests and riots.

“It all clicked,” Williams told ESPN.com. “You take a step of faith and let God lead you, and He confirms it as you go. But many times, it may not get confirmed until you go.”

Even while Ferguson was literally on fire, Williams walked the streets in an effort to facilitate peace and calm. Like no one else could, his mild-mannered demeanor and prayerful attitude eventually led to meaningful discussions that continue today.

Now over 40 years later, Williams is doing the same thing. Only this time, he’s not sending his message of healing and hope from the football field, but rather from behind the pulpit and in the streets.

“The purpose of the church is to reconcile people to Christ, reconcile people who have different disagreements,” Williams told the St. Louis Post-Dispatch. “There were conditions that fostered the environment for something tragic to happen (in Ferguson). We don’t take sides. We come down the middle and bring sides together.”

Check out the trailer below for Woodlawn and make plans to bring your friends and family to a theater near you when the film releases nationwide on October 16th!